Hudson River Park brings music of all genres to the public each summer. From creating a stage for diverse local artists at Sunset on the Hudson to collaborating with Shaolin Jazz for NYC’s first Can I Kick It? performance at Hudson RiverFlicks and more, HRPK makes music an integral part of our dynamic free programming.

The Park’s partnership with the Jazz Foundation of America brings something entirely unique to that line-up. Jazz at Pier 84 highlights the living history of New York City as legendary musicians weave the thriving legacy of the city’s jazz culture into powerful riverfront performances every third Thursday on Hudson River Park’s Pier 84. Jazz at Pier 84 exclusively features older musicians, who have a career of stories and jazz to perform for you.

We asked jazz vibraphonist Mike Freeman about his music, his career and playing in HRPK! You can catch this talented artist at Jazz at Pier 84 Thursday, July 11. 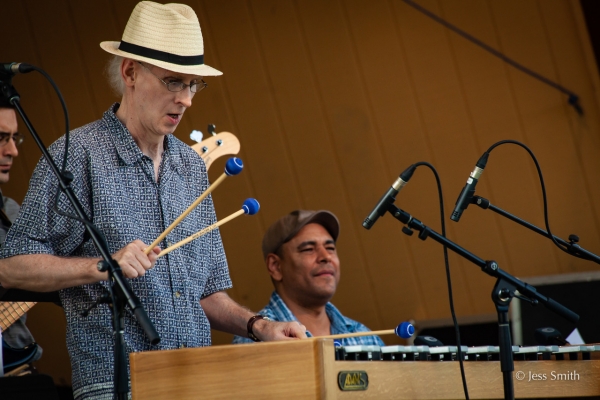 Hudson River Park: What inspires you to play music?

Mike Freeman: Playing music can be a joyous, uplifting and often healing experience. Sharing that experience and connecting with audiences through music is highly rewarding and what motivates me.

I grew up in Omaha, Nebraska and was drawn to music from a very young age. My grandfather was a home builder as well as a drummer and a band leader. My grandmother sang and played both organ and marimba. My father worked his way through college playing the saxophone and clarinet on his way to getting a civil engineering degree. Live music, recorded music and music on TV was often in the air and discussed around the house when I was a kid.

HRPK: What is the most meaningful thing that has happened to you in the Park?

MF: I’ve seen Pier 84 and the Park in general change and grow over the past 38 years. The most memorable and meaningful thing that happened to me there was watching our daughter learn to ride a bike when the pier was wide open, before there was a bike path.

HRPK: What are you known for?

MF: I’m known for performing and recording original music with my own groups as well as for my work with several high-profile Latin groups. I’ve also produced two separate benefit concerts for musicians affected by hurricanes. My performance at Pier 84 is part of a two-concert series titled Latin Music in Hell’s Kitchen, A History. For over 30 years, numerous Latin music record distributors dotted the landscape of 10 Avenue from 42 to 52 Street. This series will focus on the once-vibrant Latin music record industry that no longer exists in Hell’s Kitchen as well as the tradition of the vibraphone in Latin music. Historical commentary and photograph displays will be a part of the performances. Legendary guests include percussionist Ray Mantilla and bongocero/singer Jose Mangual Jr.

Latin Music in Hell’s Kitchen, A History is made possible in part with public funds from Creative Engagement, supported by the New York City Department of Cultural Affairs in partnership with the City Council and administered by LMCC.

HRPK: What is your philosophy toward performing?

HRPK: Can you tell us a little about the jazz community around HRPK?

MF: Manhattan Plaza is a building of about 3,500 performing artists, many of whom are musicians. The complex sits on an entire city block between 9 and 10 Avenue and 42 to 43 Street and was among the very first high-rises in Hell’s Kitchen dating back to 1977. Some famous jazz musicians who have lived here include Charles Mingus, Dexter Gordon, Woody Shaw, Paquito D’Rivera, Walter Bishop Jr., Muhal Richard Abrams and John Hicks. Current residents include Ray Mantilla, Amina Claudine Myers, Jack Walrath, Art Blakey alumni David Schnitter and Valery Ponomarev and former resident Bobby Watson. Also of note is that Alicia Keys grew up here in the building.

For a soulful performance sure to swing, sound good and feel good, don’t miss Mike Freeman with special guests Ray Mantilla and Jose Mangual Jr. at Pier 84 Thursday, July 11. Our Jazz at Pier 84 series continues through September, so mark your calendars—and be sure to check out all the music coming your way this summer in HRPK!