Have you ever wondered what lives deep in our oceans? Or wanted to ask a marine scientist what it’s like to conduct research out at sea? Our Park community was given this very opportunity in October, as Carrie Roble, the Director of Science and Stewardship of Hudson River Park’s Estuary Lab boarded the E/V Nautilus.

The E/V Nautilus is an ocean exploration vessel equipped with state of the art ocean technology, including remote operated vehicles (ROVs) that can dive deeper than humans are able. Aboard the ship, scientists are studying everything about the ocean: the animals and plants, the chemistry and water quality, the landscape of the ocean floor, shipwrecks and more. Expeditions like this build an increased understanding of the open ocean through the work of research vessels and adventurous scientists. 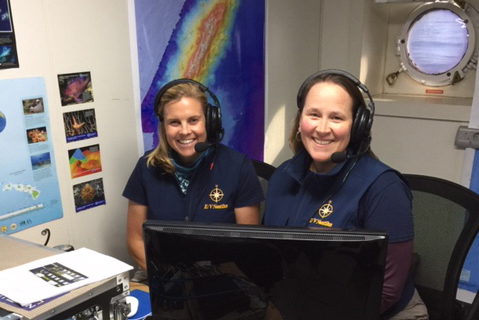 Carrie served as a Science Communication Fellow aboard the E/V Nautilus during an expedition to the Greater Farallones and Cordell Bank National Marine Sanctuaries, two urban marine sanctuaries off the coast of San Francisco. Carrie supported scientists as they mapped and characterized fish habitats, species and communities in a deep-water habitat that had never been explored. Data was collected using ROVs along with deep-sea mapping, to help inform assessments on resources and future sanctuary management plans work that aligns with HRPK Estuary Lab’s efforts here in NYC.

Something that also makes the E/V Nautilus special is its commitment to making science accessible to the public, and thus anyone was able to sign up to participate in a Ship to Shore Interaction. During these live video conferences, Science Communication Fellows, such as Carrie, shared live footage from the vessel.

You might also recognize the E/V Nautilus Ship to Shore Interactions from HRPK’s SUBMERGE Marine Science Festival, where scientists called in for a live Q&A with festival participants. During Carrie’s time aboard the Nautilus, we were excited to have students from the Dual Language Middle School join a Ship to Shore interaction following an Estuary Lab field trip program.

Want to learn more about science and research HRPK’s Estuary Lab scientists are conducting right in your west side backyard? Explore our current River Research.