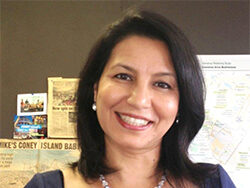 Purnima Kapur is a highly accomplished Planning Professional with over 25 years of experience. She is currently a consultant to Harvard University’s Allston Initiative, a multi phased, multi-year large scale project building upon Harvard’s campus in Allston and creating the vision for a new mixed-use state-of-the art community. She also teaches at Columbia University’s Graduate School of Planning and Architecture.

She was until recently, the Executive Director of the New York City Department of City Planning (DCP), where she oversaw the agency’s five Borough Offices as well as the Central Planning divisions. Ms. Kapur is one of the key architects of New York City’s groundbreaking Mandatory Inclusionary Housing regulation. Under her leadership, the City adopted five Integrated Neighborhood Plans in four boroughs, as well as an innovative plan for the redevelopment of Greater East Midtown.

Ms. Kapur has been a key player in the redevelopment and transformation of Brooklyn over the past two decades. She served as Director of DCP’s Brooklyn Borough Office from 2006-2014, a period of unprecedented growth and redevelopment. While in that role, she led high-priority and transformative projects, including the development of Greenpoint-Williamsburg, Downtown Brooklyn and Coney Island among other neighborhoods. In her role as Director of DCP’s Bronx Office from 2001-2006, she led the largest rezoning agenda in the borough’s history touching almost every neighborhood in the borough, from Yankee Stadium and Port Morris to Riverdale, Throggs Neck and City Island.

Ms. Kapur is trained as an architect and a city planner, with dual Masters degrees from the Massachusetts Institute of Technology.