Atlantic menhaden, also known as bunker, are a species of schooling fish that swim in large, coordinated groups. These fish are filter feeders that use their gills to collect plankton in surface waters, so their schools are often visible to observers. Menhaden and other river herring, such as shad, make yearly migrations running upstream to coastal waters in order to spawn.

In recent weeks, large schools of menhaden have been observed in our local waters off the coast of Long Island and in New York Harbor, numbering in the thousands. Along with these schools, numerous menhaden have also unfortunately been observed as dead or struggling to swim, an event called a fish kill.

Why is this happening? There are many root causes of fish kills though they are typically due to low dissolved oxygen (DO) levels or temperature swings, the latter of which has been observed in the past few weeks with rapidly decreasing temperatures. Seasonally, our waterways often exhibit low levels of DO in summer due to high temperatures that reduce the amount of oxygen that water has the capacity to hold. Low DO levels can also be caused by algal blooms or combined sewer overflow events following rainstorms. It’s also important to note that river herrings like menhaden are particularly sensitive species and are often exhausted after spawning, making them more susceptible to any of these stressors. 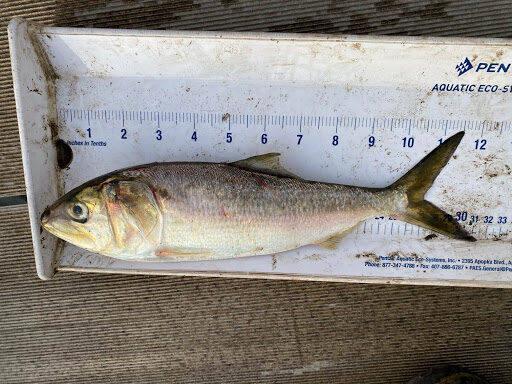 If you’ve observed a number of dead fish along the coast in our local NYC waters, it was likely connected to this fish kill. The New York State Department of Environmental Conservation is aware of this event and is taking samples to determine cause of death. According to DEC officials: “The exact cause has not yet been determined but preliminary information suggests these fish are dying due to a low dissolved oxygen event. Fish such as bunker that swim in large schools are particularly vulnerable to low dissolved oxygen content. Low dissolved oxygen, or hypoxia, can often be fatal to these large schools while other fishes and marine organisms are stressed but will ultimately survive. Hypoxia can be triggered by large numbers of fish in confined bodies of water, excessive algal growth and warm water temperatures. In addition to these factors, warm daytime temperatures can further exacerbate low dissolved oxygen levels in shallow bodies of water.” You are welcome to share any reports or pictures to marinefisheries@dec.ny.gov.

Though this event is concerning, it is unfortunately not rare to see fish kills of sensitive species such as menhaden. It is still important to determine the cause of the event, and scientists have been working to determine this information. Overall, events like this highlight how much more work we must do to make sure our waters are as hospitable as possible to the animals that have historically lived here — after all, they were here first. We must continue to protect and restore our natural habitats, especially in the face of climate change.

Another unusual event observed in our waters last week bears an interesting connection with the influx of menhaden. Just this past week, a returning humpback whale was observed off of HRPK’s Pier 84, which Gotham Whale identified whale NYC0089, which was spotted June 2018 and November 27, 2020 before its sighting last week. Menhaden are an important link in the Hudson River food web, providing a key food source for a large number of larger species in New York Harbor, including whales, and it is likely that the humpback followed schools of menhaden into the harbor.

Our River Project team works to communicate important information about our River Sanctuary, and we appreciate the outpouring of concern from our community over what has been observed in our waters. If and when more information about this event becomes available, we will share updates.

Learn More
School of American Shad Fish in the River