Since fall of 2019, the south side of HRPK’s Pier 40 has held a message of gratitude – a mural by the artist Stephen Powers that reads “I WANT TO THANK YOU.” This artwork has spoken to New Yorkers throughout the challenges of the past year – and the story behind the artwork only enhances its resonance.

Powers’s mural is part of a global campaign featuring some of the world’s most talented street artists to engage people and encourage country leaders from around the world to replenish the Global Fund for the next three years. The Global Fund is a partnership between governments, civil society, the private sector and people affected by AIDS, TB and Malaria that invests around $4 billion a year in and funds life-saving programs run by local experts in impacted communities. The Global Fund Replenishment conference took place in Lyon, France October 10, 2019.

In advance of the conference, key sites in New York, London, Washington D.C., Berlin and Paris were transformed by artists during September and early October 2019. The mural campaign was curated by Museum of the Street and its founder, Hudson River Park Friends Board Vice Chair Scott Lawin, with support from The Bill & Melinda Gates Foundation and Merck and organized by (RED). (RED) is a non-profit founded in 2006 by Bono and Bobby Shriver with the sole goal of ending AIDS. To date, (RED) has generated more than $600 million for the Global Fund to fight AIDS, Tuberculosis and Malaria and to support HIV/AIDS grants in Ghana, Kenya, Lesotho, Rwanda, South Africa, Eswatini, Tanzania and Zambia. 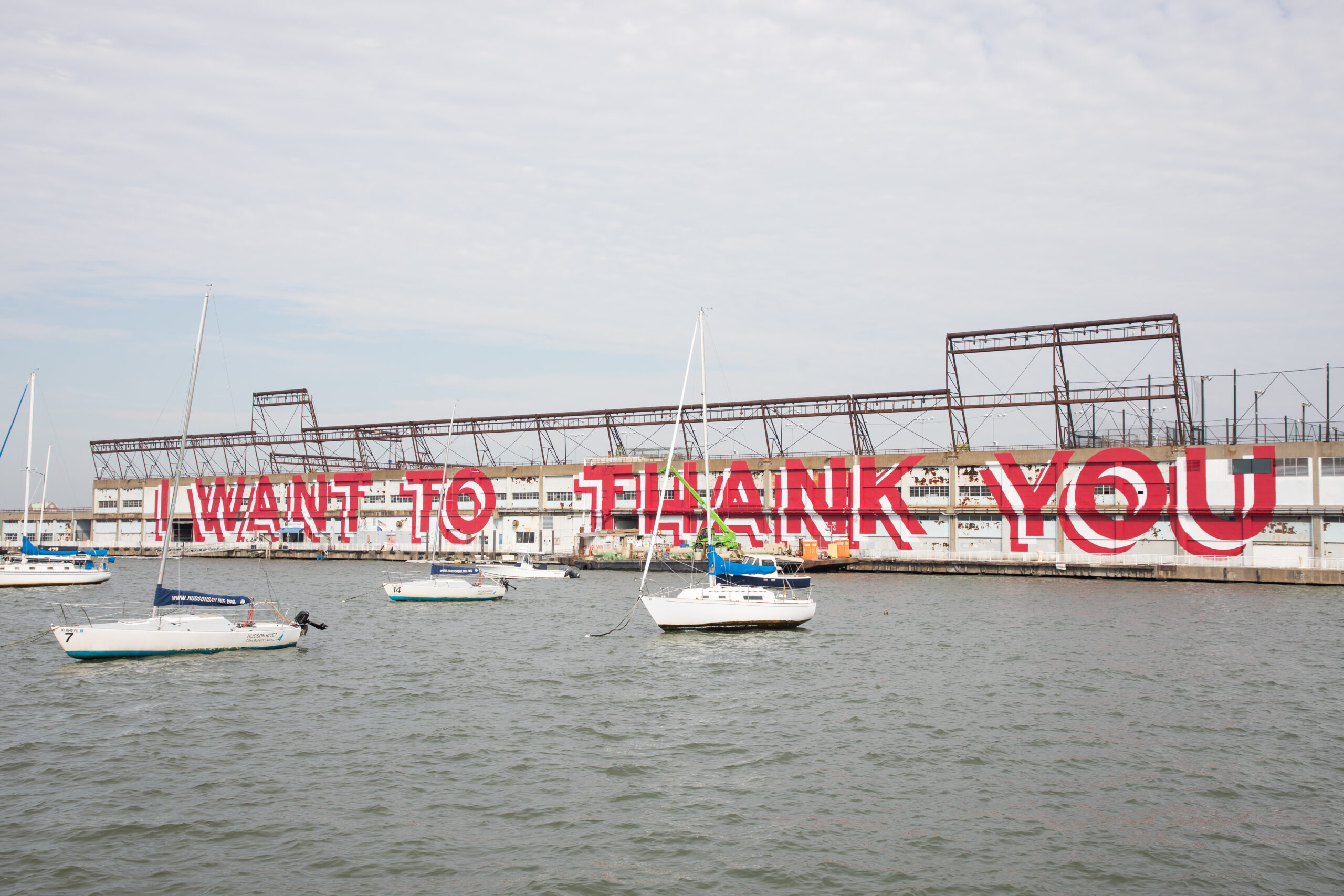 Hudson River Park has been honored to host a mural by Stephen Powers, an internationally recognized contemporary artist, Fulbright scholar and local resident. Powers drew inspiration from local history and artists, as reflected in his artist statement:

David Wojnarowicz was an artist and activist who died from AIDS at the awful age of 36. He worked with a group of artists to make art on the then abandoned Pier 34, working without permission or commission to create art without compromise. The project was titled “Seeing Possible Everywhere” and that serves as an inspiration and challenge to the present and future generations that create in his wake. I work the terrain as David did, dreaming into action the dreams that keep me up at night.”

This reminder – in Powers’s words – “of what we can achieve together” has certainly been a source of inspiration and hope for all of us this year, as we face another global health crisis. You’ll find an especially striking view of the mural from Hudson River Park’s Pier 26, which opened last fall. 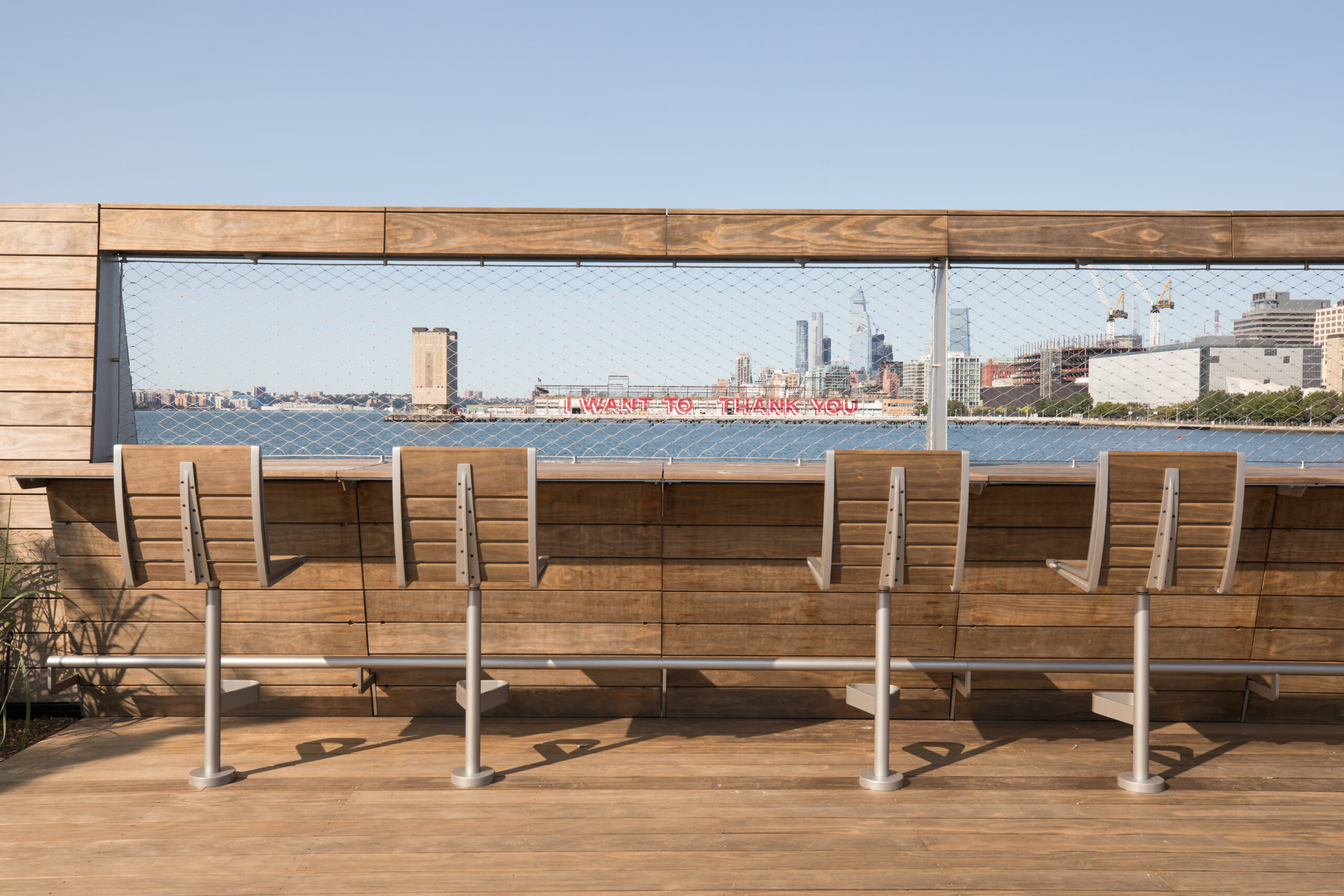 Park visitors enjoy the Pier as the sun sets

Discover the latest from Hudson River Park! Find fun tips for your next visit, read up on upcoming events, and dig deeper into exciting Park initiatives.

Learn More
Sunset over the ball fields at HRPK's Pier 40

At more than 15 acres, Pier 40 is the largest pier along the Hudson River. This mixed-use commercial/recreation pier generates revenue for the overall Park’s care while also hosting boating, our River Project and much-loved public ball fields.