Hudson River Park is honored to host an important new monument to the LGBT community. Designed by artist Anthony Goicolea and unveiled on Sunday, June 24, 2018, the Memorial is located within the Greenwich Village section of the park between West 12 Street and Bethune Street, and recognizes those lost in the Orlando Pulse nightclub shooting in June 2016, as well as all victims of hate, intolerance and violence. Governor Andrew Cuomo, Lieutenant Governor Kathy Hochul, NYC Council Speaker Corey Johnson, State Senator Brad Hoylman, members of the Governor’s LGBT Memorial Commission and artist Anthony Goicolea were among those in attendance at the monument’s unveiling. 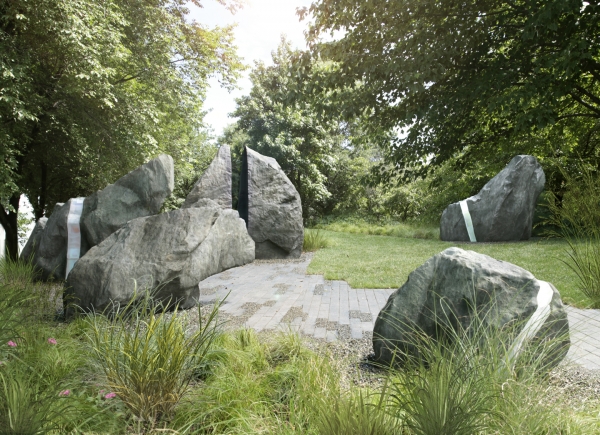 The memorial features nine modified “boulders” fabricated in bronze, some of which are bisected with a clear, laminated glass with refractory components that act as a prism to create subtle rainbow patterns on the surrounding lawn and nearby objects. The memorial’s site-specific design promotes thought and reflection while encouraging people to unite in the Hudson River Park’s communal environment.

“This memorial serves to honor the lives cut tragically short in the Pulse nightclub shooting two years ago as well as the lifelong struggle and adversity faced by countless individuals in the LGBT community,” Governor Cuomo said. “As we recognize the sacrifice this community has had to endure throughout the course of history, we are reminded of our commitment to protecting and advancing the rights of the LGBT community until we live in a world free from hate once and for all.”

During the unveiling, artist Anthony Goicolea shared a memory of running along the Hudson River and its piers when he first moved to New York City in the 1990s. At that time, he had never seen LGBTQ life celebrated so openly, so the waterfront became a place of comfort and identity to him. Mr. Goicolea designed the memorial to flow harmoniously with the green riverfront and to be inclusive of community, which is as much a part of the memorial as the physical structures. “The memorial encourages people to look beyond the exterior of what they are presented with,“ said Mr. Goicolea. “The proportion of the rocks and their circular arrangement creates a safe harbor that beckons visitors to rest upon them, acting as a unifier to communities of differing people who will come to sit, visit, commune, mourn, love and remember.”

New York City Council Speaker Corey Johnson said, “The horror of the Pulse nightclub shooting is forever etched in our collective memories, and this memorial will help ensure we honor the victims and keep in mind the ongoing struggle of the LGBTQ community. I’m grateful to Governor Cuomo for creating the LGBT Memorial Commission, to Anthony Goicolea for his beautiful design and to the Commission members for shepherding this project to completion. Their work inspires us to keep fighting for full LGBTQ equality everywhere.”

From its harmonious, organic integration with our Greenwich Village parklands to the prismatic refraction of light along the river, this monument provides a purposeful and beautiful addition to the Hudson River Park landscape—and a meaningful destination for your next walk in HRPK.