Historic Pier 57 is one of several locations in Hudson River Park where limited commercial uses are permitted to support the Park’s overall care and operations. In addition, the Pier also provides other public benefits, most especially, the new rooftop park – a nearly two-acre public open space offering incredible views of Little Island and New York Harbor, and now open from 6:00 AM until 1:00 AM daily.

When you arrive at Pier 57, go to the south side near City Winery to access the rooftop park. The main entrance is along the south side of the pier facing the water. Once inside, take the elevator or stairs to get to the roof. We apologize for the dust as the ground floor is still under construction.

Other uses now open at Pier 57 include offices for Google, and City Winery, a popular performance venue with a public restaurant, tasting room and its signature wine production facility—all overlooking the river and lower Manhattan.  In Spring 2023, a new public living room, environmental tech classrooms for Hudson River Park’s River Project educators, a food market curated by the James Beard Foundation, and additional community spaces under Jamestown’s oversight will join City Winery on the ground floor in welcoming and serving the public.

Directions:
Located at W 15 St. & Hudson River Park
By Subway – A, C, E or L train to 14 St./8 Ave. station. Walk West to W 15 St.
By Bus (From North/East/South) – Take the M14, M20 or M11 bus to 14 St. Walk West and Pier 57 will be directly in front of you on the right.
Rooftop Entrance: Enter the public walkway that wraps Pier 57’s perimeter at the south end, near City Winery. Walk around the apron along the Hudson River to access the main entrance doors to the Rooftop Park. Once inside, there is an elevator and stairs to get up to the roof.

What is a Mixed-Use Pier?

Under a lease with the Hudson River Park Trust, the development team led by RXR Youngwoo and Baupost, has invested approximately $410 million to restore the building and adapt it for new uses while retaining its historic features. The completed project will serve as offices for Google, the project’s anchor tenant, as well as cultural, recreational and public market activities. The redevelopment plans were approved unanimously by Community Board 4, the Manhattan Borough President, the City Planning Commission and, ultimately, the New York City Council through New York City’s Uniform Land Use Review Process (ULURP) that culminated in April 2013.

The redevelopment process of the Pier has been sensitive to the historic nature of the structure every step of the way, with designs approved by the New York State Historic Preservation Office and the National Park Service.

Visit here for information on the executed lease for Pier 57. 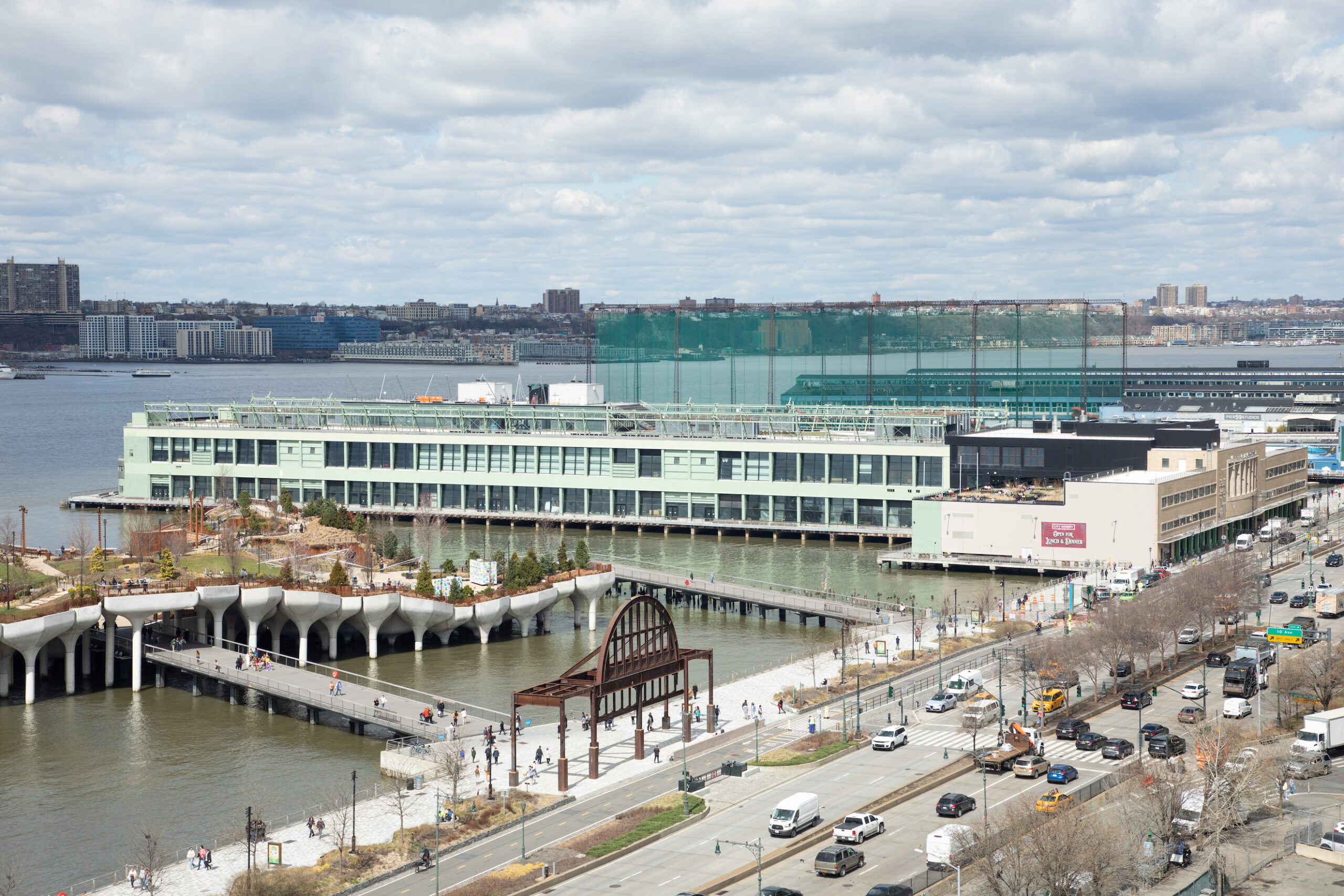 Restoration of an Engineering Marvel

The Pier, originally constructed in 1952, is listed in the National Register of Historic Places, in large part because of the innovative engineering techniques that keep it afloat (read more about this fascinating story in David Dunlap’s The New York Times piece). Just below the water, three large concrete caissons support the main structure in lieu of traditional piles. Furthermore, these underwater containers serve as unique basement spaces, unlike any other pier.

The Pier first opened in 1954 as the terminal for Grace Line, and then in 1969, it became the Hudson Pier Depot for the New York City Transit Authority. The depot closed in 2003 and the Pier has been shuttered ever since.

Pier 57’s captivating past — and its exciting future — tell an important story about the legacy of innovation on our west side waterfront. 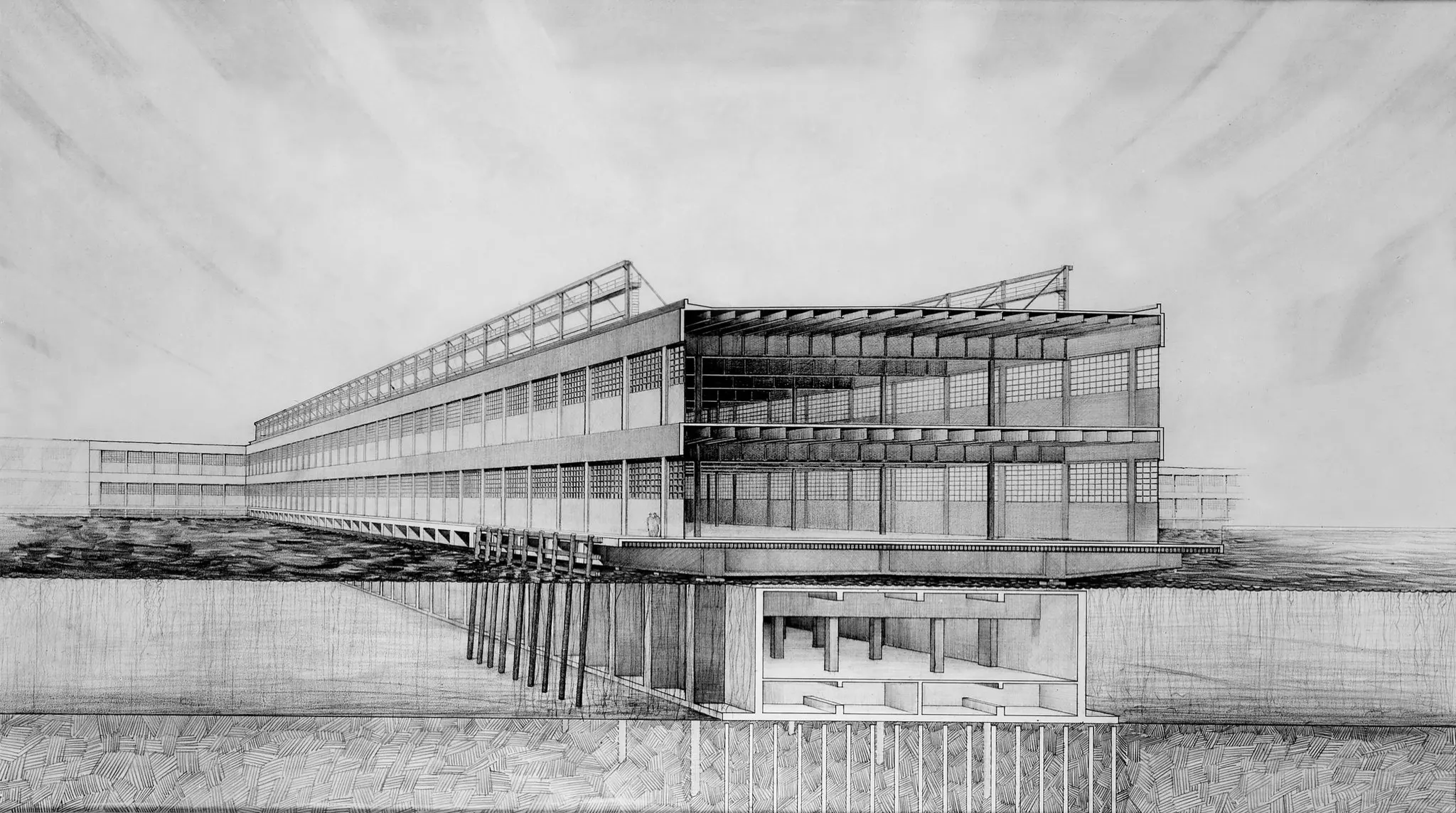 This fall, the James Beard Foundation (JBF) will open a mission-centered showcase kitchen, dining and demonstration space, and vendor kiosk featuring new chef-driven, fast-casual concepts selected by the JBF. The food hall will also be home to an additional 17 kiosk vendors and will serve as an incubator for local small businesses and food entrepreneurs aligned with the Foundation’s mission of championing a standard of good food anchored in talent, equity and sustainability. Learn more.

Hudson River Park’s River Project will begin inviting students to experience custom-designed games and imagery showcasing the Hudson River Park Estuarine Sanctuary.  This high-tech classroom is an exciting opportunity to expand the park’s environmental education programming. The Park’s River Project will utilize this space to host students from all five boroughs of NYC and members of the public, both children and adults.

Learn More
Pier 66 before and after shot