Skip to main content
A fish tank at the entrance to HRPK’s administrative offices at Pier 40 grants visitors and staff a glimpse of the thriving marine habitat below. Just as the wildlife in our Estuarine Sanctuary changes seasonally, so do our resident fishes—thanks to the Hudson River Park Estuary Lab scientists who maintain our lobby aquarium. 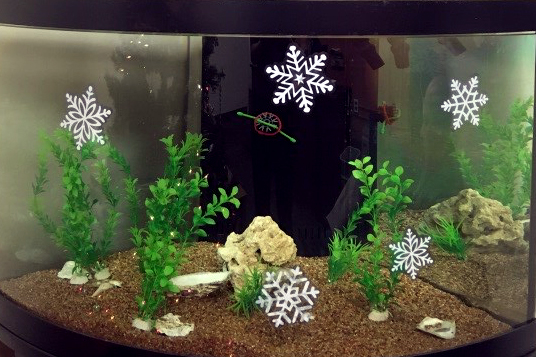 This season, you’ll find a rock gunnel and an oyster toadfish in our tank, both juveniles. Rock gunnel fish can grow to be around a foot in length and are often likened to eels because of their elongated shape. At 5 inches long, ours still has a lot of growing to do! While rock gunnels do resemble American eels, they’re more closely related to white perch—both species we find in the Park’s waters. 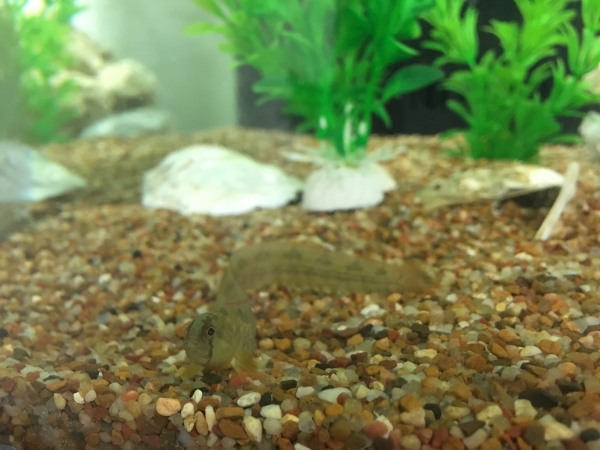 Rock gunnels get their name from their preference for living in and around rock clusters at the bottom of the water they inhabit. You can easily identify this species by dark spots that run along its back and dorsal (top) fin, but our little gunnel is too small and young to exhibit these markings.

So, why is this fish in our tank right now? Rock gunnels spawn in colder temperatures, so it makes sense that we see them around in the winter. The piers and pile fields throughout Hudson River Park create areas where wave energy breaks down and the water movement is gentler, which is ideal for fish to lay their eggs, so we’re more likely to see juveniles like our current resident.

You may need to look closely to spot our oyster toadfish—it’s only about three inches long. These fish also typically grow to be around a foot long, but can reach as long at 17 inches! Oyster toadfish are aptly named for the oysters they eat, and the toad-like croaking sounds they make during their mating ritual and when they feel threatened. Remarkably, these fish make their eponymous noises without vocal chords! Instead sound emanates from sonic muscles attached to their swim bladder­, the organ fish use to move up and down in the water column.

Oyster toadfish are especially hardy—able to tolerate environmental changes, from adjustments in water temperature to the presence of pollutants.

Both rock gunnels and oyster toadfish are bottom dwellers, feeding on small crustaceans and other little critters that live on the river floor, similarities that make it simple to care for them. Our tank holds 54 gallons of water, which provides plenty of space for these little fish to swim around. The Estuary Lab team has been hatching brine shrimp—also known as sea monkeys—to feed our tank residents, and the fish have been loving them. 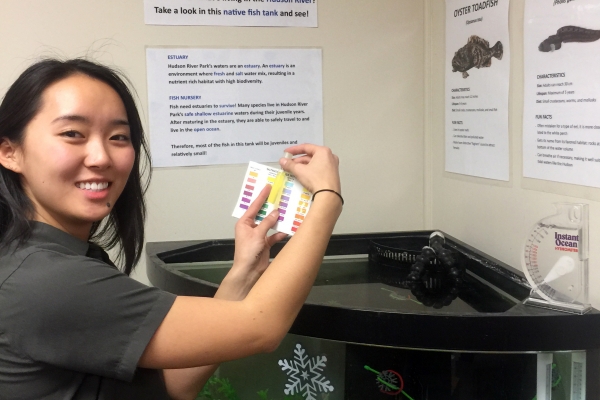 In addition to feeding our aquatic greeters regularly, Estuary Lab staff monitors water quality in the tank, testing weekly to ensure that the temperature, salinity, pH, nitrate, nitrite and ammonia levels in the tank are all safe for the fish. 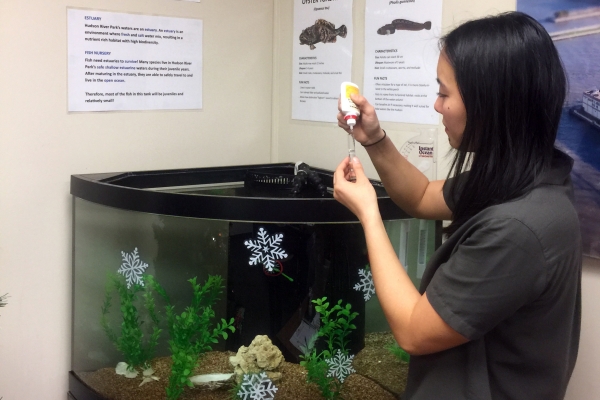 Estuary Lab scientists need to be especially careful when introducing fish to the tank or returning them to the river, a process that requires patience and close attention. Our tank contains tap water prepared with water conditioner and salt. To ease our resident fish into this environment, we place them in a tank with river water when first retrieved from the Hudson. Over the course of a week, we carefully remove some river water and add prepared water until the ratio is close enough to 100% prepared water for the fish to enter the main tank without experiencing a strong shock to their systems. Our Estuary Lab team will transition our fish similarly—slowly swapping out prepared water for river water—when it is time to release them back into the river. 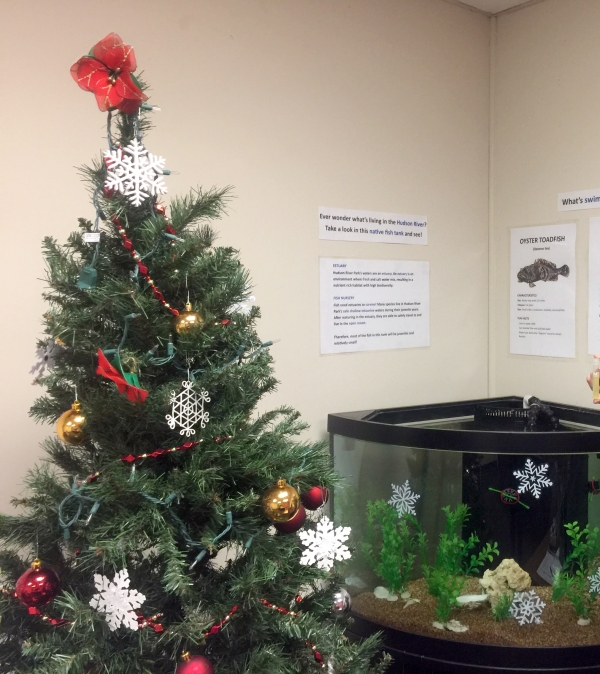 Giving these residents a temporary home in our lobby allows all who pass through our offices to get a closer look at some of the more than 70 species of fish that thrive in our Estuarine Sanctuary and how these populations shift with the season. As you can see, tank décor changes with the season, too!