Great movies, like the ones we’ve curated for our 20th Anniversary Hudson RiverFlicks season, inspire laughter, provoke thought and stir deep emotion. With one month of riverfront cinema still ahead in your Park, we’re counting down the most inspiring—or hilarious—quotes from our upcoming RiverFlicks hits. 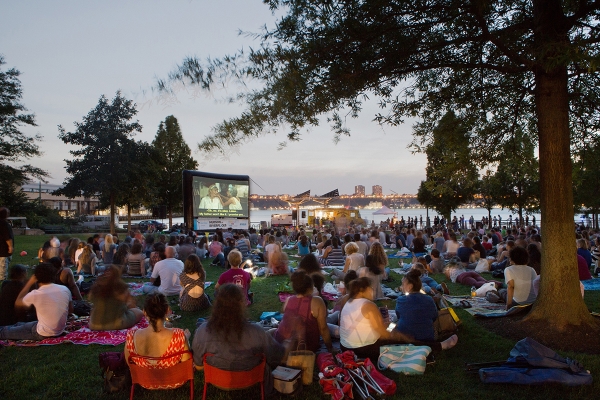 Judy Shepherd: Well, just in case any scary stuff comes out. Plus, there’s a lion in my aunt’s bedroom. What am I supposed to do about that?
Alan Parrish: What do I look like, a Ringling Brother?
Judy Shepherd: But she’ll be home soon!
Alan Parrish: Won’t she be surprised! I hope she’s not allergic to cats.

“But as long as you hold onto so much hate then I don’t think you’re ever going to become what I know you wanna become… a detective. Cause you know what you need to become a detective?… Love. Because through love comes calm, and through calm comes thought. And you need thought to detect stuff sometimes, Jason. It’s kinda all you need.” – Chief Bill Willoughby

“I may look like a hardened criminal, but I’m innocent!” – Paddington Brown

“I used to want to save the world. To end war and bring peace to mankind, but then I glimpsed the darkness that lives within their light. I learnt that inside every one of them there will always be both. The choice each must make for themselves—something no hero will ever defeat.” – Diana Prince

Daniel: Wouldn’t a fly swatter be easier?
Miyagi: Man who catch fly with chopstick accomplish anything.
Daniel: Ever catch one?
Miyagi: Not yet.

“Every memory has a piece of its artist.” – Dr. Ana Stelline

“Winter is a good time to stay in and cuddle, but put me in summer and I will be a happy snowman.” – Olaf

“I have to sing, I have to play. The music, it’s not just in me, it is me. When life gets me down, I play my guitar. The rest of the world may follow the rules, but I must follow my heart. You know that feeling, like there’s a song in the air and it’s playing just for you. I hope you like it.” – Ernesto de la Cruz

So get ready to smile, laugh and get inspired as this Summer of Fun continues. We’ll see you at Hudson RiverFlicks!