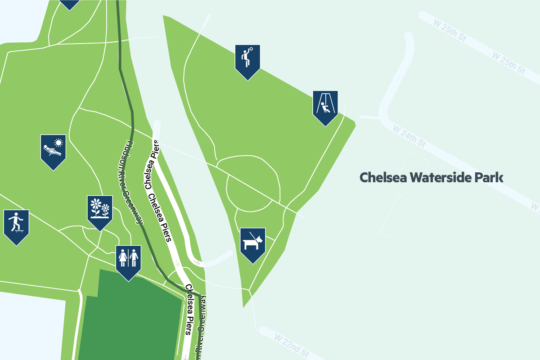 Helpful Info / More About Chelsea Waterside Park
Closest subway lines
A
B
C
Accessible
Water
Soon there will be another imagination-sparking playground in HRPK. A one-of-a-kind science-themed play area is planned for HRPK’s Pier 26 — and we need your help to make it happen. Learn more about these exciting plans and support the Pier 26 Science Play Area Capital Campaign.

Each of Hudson River Park’s three playgrounds has been custom-designed by celebrated landscape architects to provide uniquely inspiring play opportunities for children. During warm weather seasons, each also provides welcoming water features to delight and cool kids who like to get wet. Bring your beach buckets!

In summer 2018, Hudson River Park opened a new and enlarged playground featuring a custom-designed, multi-colored, 64-foot wooden slide in the shape of a Pipefish, one of many fish species that lives within Park waters. The slide was designed and built by a Denmark-based playground design company, and is the first of their themed playground structures to be installed in the northeastern U.S. The playground also includes multiple water features.

The Chelsea Waterside Playground brings together much of what is special about Hudson River Park, including the adaptive reuse of relics from the past. Among these are limestone cattle head sculptures reclaimed from a former slaughterhouse, the New York Butchers’ Dressed Meat Company, after the Hells’s Kitchen building was demolished in 1991. Granite seating blocks and medallions from the former elevated West Side Highway have also been repurposed within the playground.

Hudson River Park is currently working on plans for a new comfort station, expanded dog run and other improvements in the Chelsea Waterside Park area.

Oriented north-south instead of in the traditional pier configuration, Pier 63 provides an opportunity to create a wide-open passive green space – the largest in the Park.

Filled with activities for children including swings, climbing structures and water features, children exercise their imaginations and muscles at this urban oasis.