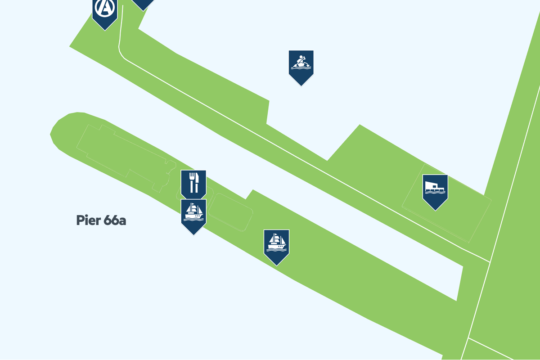 Helpful Info / More About Pier 66a
Closest bus lines
M23
Food
Restroom
Now found at Hudson River Park’s Pier 66, the Lightship “Frying Pan” is listed on both the New York State and National Registers of Historic Places. The US Coast Guard once used lightships as floating lighthouses to prevent other ships from running aground on shoals or submerged rocks that were too far from land to be served by a lighthouse on shore. Many were also used to mark the entrances to harbors. The Frying Pan is one of only 13 lightships remaining from more than 100 originally built.

Constructed in 1929, Lightship #115 “Frying Pan” guarded its namesake Frying Pan Shoals located 30 miles off of Cape Fear, North Carolina, from 1930 to 1965. The Lightship Frying Pan has led a remarkable life. After being abandoned for 10 years while docked at an old oyster cannery in the Chesapeake Bay, it sank and was rescued after being underwater for three years before being raised.  After tons of silt and shells were removed from the hull, the ship was outfitted with a new engine and, in 1989, was sailed to New York City. While the outside of the ship has been restored to her original appearance, the inside retains the barnacle-encrusted, sunken-ship motif that acknowledges her storied past.

The Frying Pan is also home to the Pier 66 Maritime Bar and Grill. Visit the Frying Pan website for current dining offerings.