Restoration Update: If you’ve visited Clinton Cove lately, you have likely noticed the absence of this iconic Park landmark. Malcolm Cochran’s Private Passage is headed to Virginia for conservation. We expect this beloved piece of public art to return to its home in Hudson River Park in the spring. 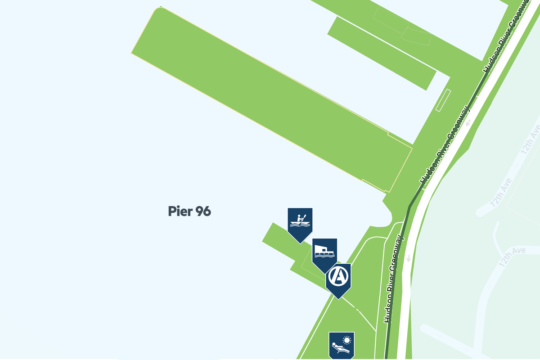 Helpful Info / More About Pier 96
Closest bus lines
M31
M57
Accessible
Public art is an integral component of Hudson River Park. The Park’s design process has included the creation and installation of place-specific public sculpture in a number of locations. In addition, the Park also proudly hosts two public memorials that were carefully planned to be integrated into the Park landscape, as well as other permanent installations that enhance the Park environment.

Created by artist Malcolm Cochran, Private Passage (2005), found in Hudson River Park’s Clinton Cove, is a distinctive sculpture consisting of a 30’ x 8’6” wine bottle resting on its side, within which is a representation of an interior stateroom from the ocean liner, Queen Mary.

The bottle is fabricated of steel and finished to resemble bronze with a traditional green patina. The interior of the bottle is fashioned from sheet metal and other materials in a monochromatic scheme evoking the look of a platinum print from a black and white film, similar to an image one might view in a magazine ad of the 1930s.

This quiet, grassy area offers a retreat from the busy city. Come here to kayak, toss a ball, picnic or watch the sunset.

Learn More
Sunset at the art piece Two Too Small Tables, a metal piece of a table structure and chairs attached to sit