Throughout the Park’s four-mile-length, “upland” areas connect the many piers.  In a couple of fortunate areas, the distance between the water and the adjacent roadway widens, creating larger areas for open space in the process. One such area is known as Clinton Cove, featuring a sweeping green lawn, a boathouse offering free kayaking run by volunteers and a “get-down” where visitors can get close to the water. 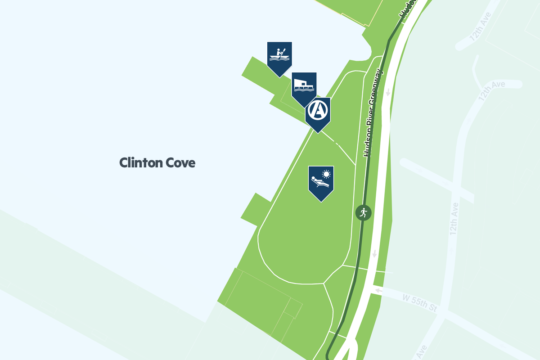 What you can do here
See all
Clinton Cove Lawn
Private Passage
Helpful Info
Accessible
Clinton Cove connects Pier 95, Pier 96 and Pier 97. A signature feature is the public art piece, Private Passage, by Malcolm Cochran. Peer inside this 30-foot-long “wine bottle” to see an interpretation of a stateroom in the original Queen Mary ocean liner.

History at a Glance

Clinton Cove was named for DeWitt Clinton (1769-1828), often referred to as the “Father of the Erie Canal.” He served in the New York State Legislature and the U.S. Senate, and was Mayor of New York City and Governor of New York State. Before being landscaped, Clinton Cove formerly served as the City’s municipal concrete plant.