Skip to main content
The art piece SENES sits on Pier 79, a steel structure with round edges connected to each other

Public art is an integral component of Hudson River Park. The Park’s design process has included the creation and installation of place-specific public sculpture in a number of locations. 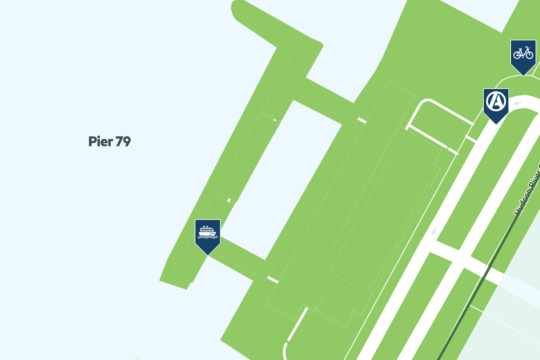 Helpful Info / More About Pier 79
Closest bus lines
M42
M50
Accessible
public memorials that were carefully planned to be integrated into the Park landscape, as well as other permanent installations that enhance the Park environment.

Pier 79 is one of New York City’s major ferry terminals. Next time you need to get to New Jersey — or next time you travel north or south on the Park esplanade — look closely at the northern side of the ferry building for Senes, an abstract steel structure created by native New Yorker, William Crovello in 1973. Senes consists of a formed, bent and welded stainless steel plate measuring 3/16 inch thick. It weighs 4,100 lbs and measures eight feet eight inches high by seven feet four inches wide by ten feet eleven inches long. It was fabricated by R.J.B Fabricators of Paterson, New Jersey.

Born in 1929, sculptor William Crovello studied at the Rhode Island School of Design, Art Students League, and Columbia University. In 1963, he moved to Spain where he began to devote himself to sculpture. Currently, he maintains studios in both New York and Pietrasanta, Italy. Senes was relocated to its current location as part of the reconstruction of Pier 86, home of the Intrepid Museum, for public access.

Kayakers prep to head into the Hudson River