Hudson River Park’s 400-acre Estuarine Sanctuary is central to the Park’s mission and identity. For over 20 years, the Park has served as a steward of the Sanctuary, protecting and restoring this invaluable resource, while also promoting community involvement in environmental stewardship and enhancing the Sanctuary’s aquatic habitat.

This commitment continues with the completion of the Tribeca Habitat Enhancement Project, the first large-scale habitat restoration effort installed within HRPK’s Estuarine Sanctuary. This project is located between Pier 26 and Pier 34 in the Park’s Sanctuary waters, and includes hundreds of structures that create habitat for Hudson River wildlife. As highlighted in The New York Times, this project added an incredible 11.2 million Eastern oysters to Park waters in total.

The deployment of these habitat enhancements contributes to the Park’s ongoing mission to  improve River habitat and support local marine species. Partnership is key on projects of this scale, and the NYS Department of Environmental Conservation, Billion Oyster Project, Hudson River Foundation and other environmental partners helped to conceive the project design and establish habitat enhancement goals.

But what exactly do these underwater habitat enhancements look like? There are five main habitat structures that this project utilizes including reef balls, gabions, oyster wraps, biohuts and textured piles. These enhancements provide more varied hard surfaces to support the establishment of sessile, or immobile, organisms like oysters and mussels. These structures also notably create habitat diversity in the otherwise soft and muddy River bottom. As oysters and other organisms settle on these structures, the project collectively creates a reef-like system or corridor that provides feeding grounds and protective habitat for resident and migrating fish populations. 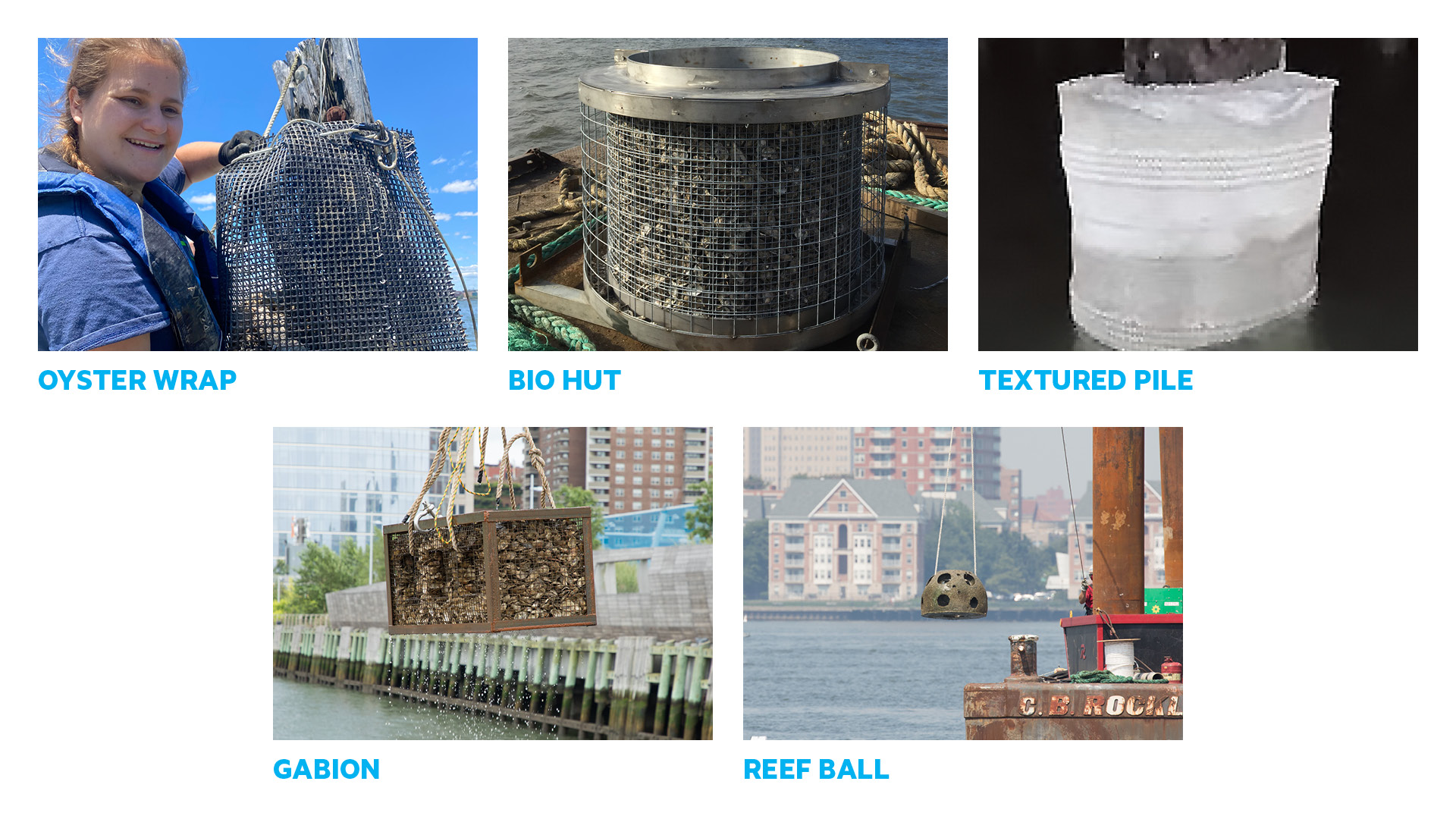 Adding over 11 million oysters to HRPK’s Estuarine Sanctuary also brings notable ecosystem benefits. Oysters are impressive filter feeders that help to clean our local waterways by filtering pollutants. In fact, an adult oyster can filter up to 50 gallons of water daily! Oysters are often considered integral to the health of our local waterways, because they increase shoreline resiliency by reducing storm surge. In the Tribeca Habitat Enhancement Project, oysters seed and fill the reef balls, gabions, biohuts and oyster wraps. Although the textured piles are not seeded with juvenile oysters, these enhancements offer invaluable vertical habitat by providing nooks and crevices for encrusting organisms including oysters, mussels and barnacles.

Overall, this project will support the Park’s Estuarine Sanctuary which is home to over 85 species of fish including lined seahorses, striped bass and more. The Park aims to continue pursuing projects that improve habitat and support biodiversity in our local waterways. Keep your eyes open to future habitat enhancement efforts in HRPK, including the construction of a salt marsh on the Gansevoort Peninsula which is scheduled for completion in 2023. We look forward to sharing more about these projects as part of our efforts to further habitat restoration and support the health of our local waterways.

The Tribeca Habitat Enhancement Project is a large-scale restoration initiative in Hudson River Park. This project deployed a variety of habitat features and added an incredible 11 million oysters in the Park’s Estuarine Sanctuary.