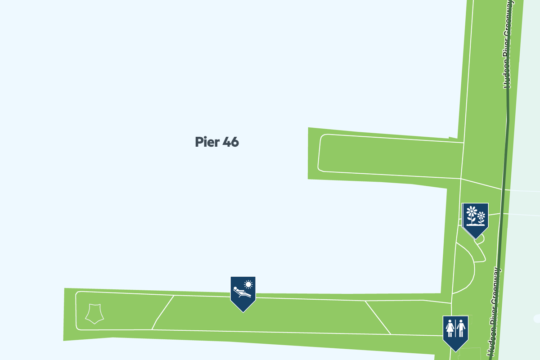 Helpful Info / More About Pier 46
Closest bus lines
M8
Accessible
Restroom
Public art is an integral component of Hudson River Park. The Park’s design process has included the creation and installation of place-specific public sculpture in a number of locations. In addition, the Park also proudly hosts two public memorials that were carefully planned to be integrated into the Park landscape, as well as other permanent installations that enhance the Park environment.

Hudson River Park’s Apple Garden, located at Charles St. in the Village, is the home of The Apple (2004). Designed by Stephan Weiss, the late husband of renowned fashion designer Donna Karan, this bronze piece is part of his Larger than Life series and honors New York City by symbolizing the city’s heart and the core of life.

The Apple is nine feet tall and weighs three tons and sits atop a circular bronze bench supported by apple cores. Park patrons can sit here and enjoy the beautiful waterside garden, which was originally designed and funded by the Garden Club of America — New York Chapter.

Countless New Yorkers head to this popular pier at the foot of Christopher Street in the warm months to catch some rays while lounging on a large, green lawn.

Home to established trees and shrubs, the storied West Village Park area includes the Apple Garden, named for the bronze sculpture designed by Stephan Weiss at its center, a whimsical tribute to New York City.