Previous Next
Day's End at HRPK

Previous Next
Day’s End (2014–21) © David Hammons, a gift from the Whitney Museum of American Art
A sunbather ejoys the warmth of the sun in Hudson River Park

Hudson River Park’s Greenwich Village waterfront is home to public art and monuments that celebrate NYC’s LGBTQIA+ community and honor its history. To enjoy this walk, you can enter Hudson River Park at Christopher Street, near the Park’s historic Pier 45, and walk north along the esplanade. 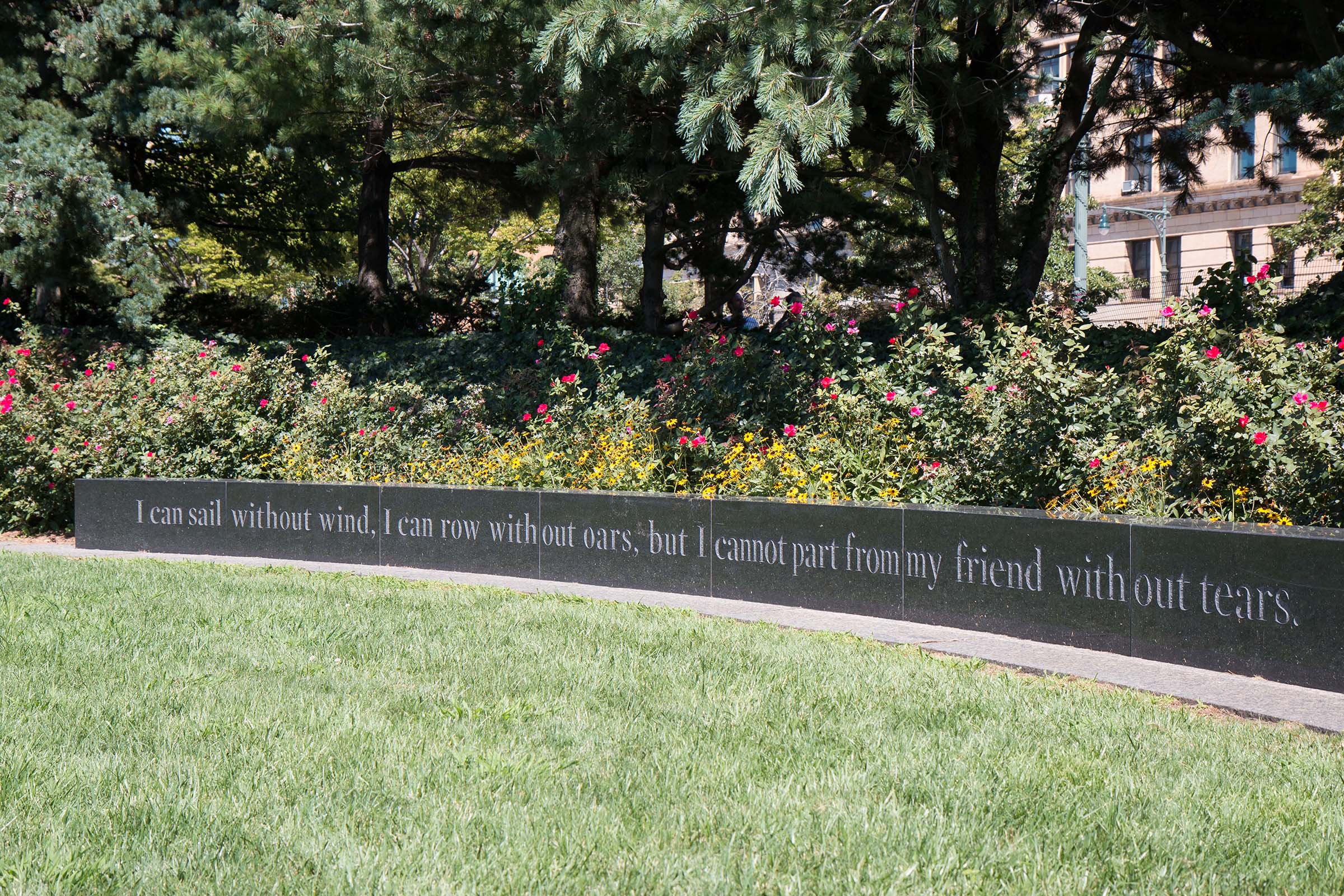 The AIDS Memorial was dedicated on November 30, 2008, the 20th anniversary of World Aids Day. Built by the AIDS Monument Committee, the permanent monument commemorates those who have died from the disease, those who live with HIV, and those who have cared for people with HIV/AIDS, educators and researchers who will one day eradicate it.

The memorial, a 42-foot long semi-circular black granite bench situated on a landscaped lawn near Bank St., is intended to be used as a place for people to sit and contemplate those that have been lost. The curvature of the bench and its accompanying path are complemented by a balcony that stretches out over the Hudson River where Pier 49 once stood. The engraving on the bench hails from a Scandinavian folk song: “I can sail without wind, I can row without oars, but I cannot part from my friend without tears.”

Learn more about the memorial from the AIDS Monument Committee and in the The New York Times. 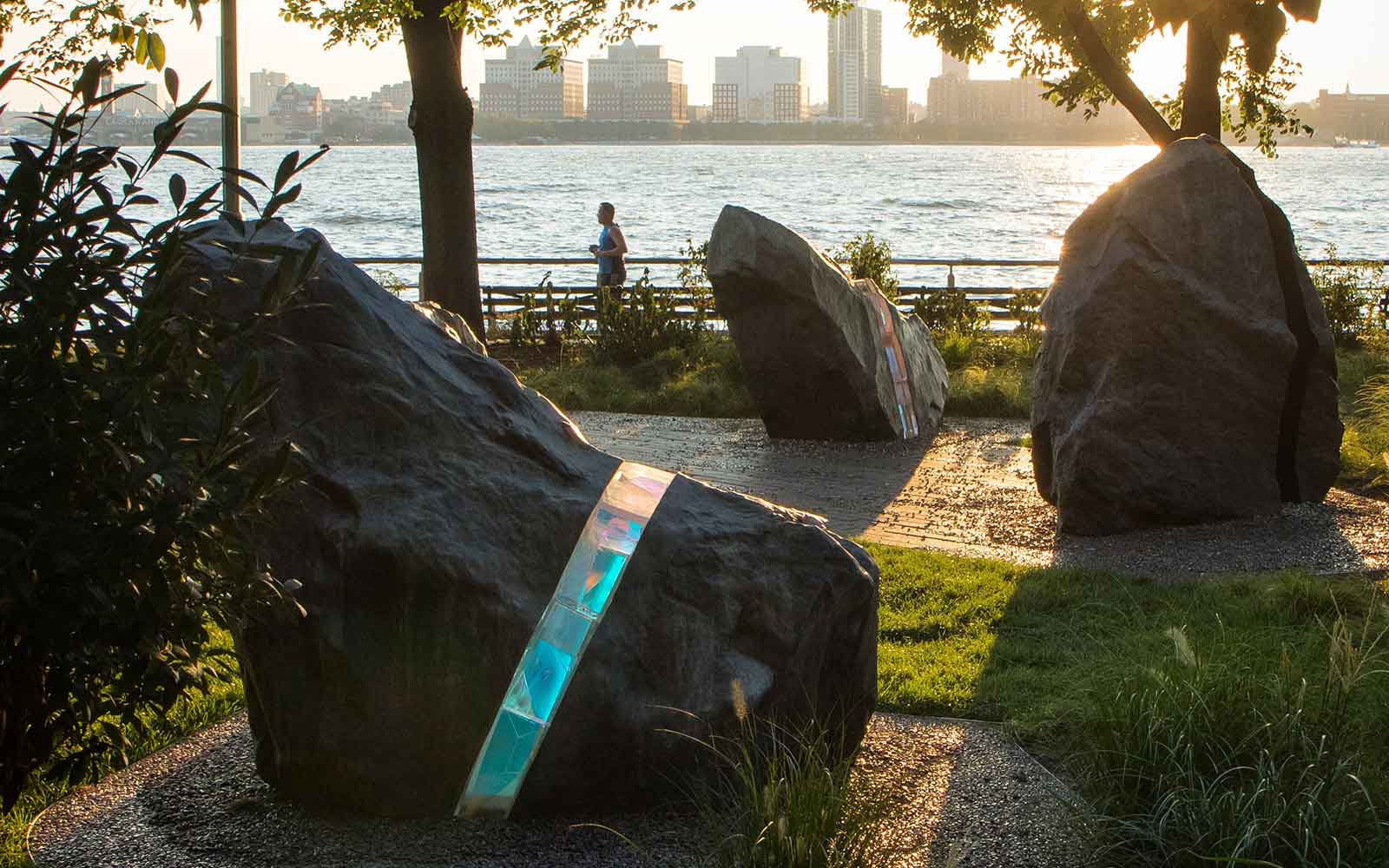 Designed by artist Anthony Goicolea, and dedicated in June 2018, this tribute recognizes those lost in the Orlando Pulse nightclub shooting that occurred in June 2016, as well as all victims of hate, intolerance and violence.

The memorial features nine fabricated bronze boulders, some of which are bisected by laminated glass with refractory components that act as a prism to create subtle rainbow patterns on the surrounding lawn and nearby objects. Giocolea designed the piece around the location, to promote thought and reflection while encouraging people to unite in the Hudson River Park’s communal environment.

In the artist’s words. “The idea of having an environment that reflects who you are and your community is particularly important when so many groups are being squashed today. A place that celebrates diversity is needed and welcome right now, and sends a powerful message.”

Read more about the memorial on our website and in Curbed New York. 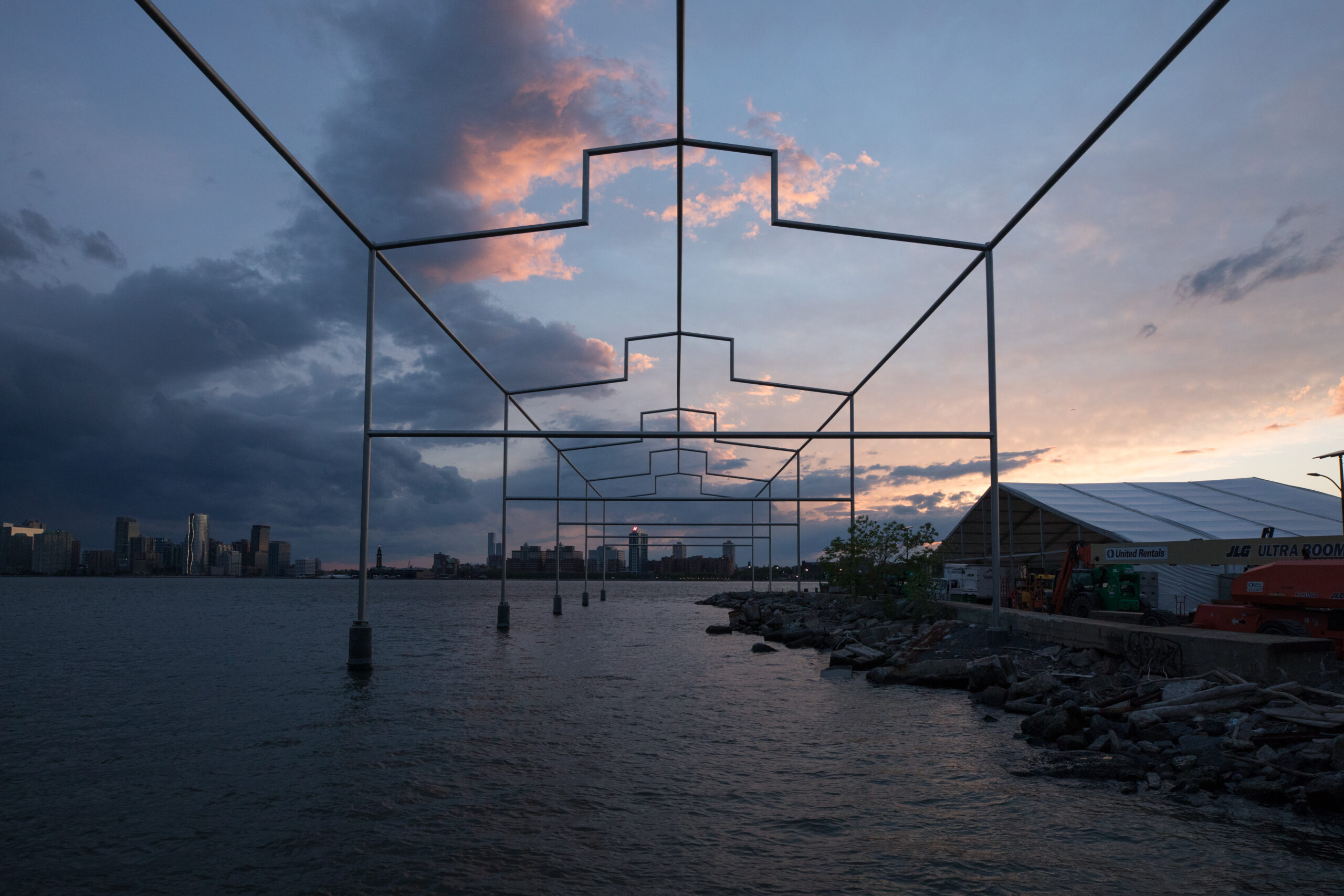 A gift from the Whitney Museum of American Art, David Hammons’ Day’s End is Hudson River Park’s largest piece of public art, and one of the largest public art installations in NYC.

The piece measures 52 feet high at its peak, 65 feet wide and 325 feet long, traced to the exact dimensions and location of the original Pier 52, one of several piers inhabited by the vibrant LGBTQIA+ community. “When I look at Day’s End, it evokes a pier that’s gone. It evokes the contributions of a generation of people. I’m able to see the temples within which they built the divinity of Queer identity,” says Elegance Bratton in the Whitney’s Queer History of the Piers.

Learn more about Day’s End from our website, The Whitney and The New York Times.

Celebrate Pride in Your Park

Kicking off this month, and all summer long, Hudson River Park’s busiest-ever lineup of free  programming spotlights and celebrates LGBTQIA+ voices. Read on as we highlight some of these outstanding artists

Learn More
Red flowers and the river as the sun sets

Hudson River Park is a 550-acre riverfront park and estuarine sanctuary spanning four miles along the west side of Manhattan, from the northern boundary of Battery Park City in Tribeca to W 59 St. in Hell’s Kitchen.