Previous Next
Rendering of Gansevoort Peninsula from a birds eye view

Hudson River Park is where you go in NYC for recreating, relaxing, events, culture, dining, panoramic views and more. On more than a dozen public piers, not to mention miles of pathways and landscapes, you’ll discover a park that offers more than you may imagine – a place that surprises and delights visitors with a diverse and eclectic range of activities and experiences that stimulate the senses and allow spirits to soar.

Hudson River Park is also a work in progress. Excitingly, there is more public park space on its way to you. Beyond design and construction, we have also been adapting to the current COVID-19 world by reimagining beloved public and educational programs so that both new and longstanding audiences can participate in them safely and remotely. We are also still conducting scientific research, including environmental DNA sampling in the 400-acre River Sanctuary that surrounds the Park’s many piers.

Find out what we have to inspire you…

Are you in need of some good news? The 2.5 acre Pier 26 opened on September 30, 2020. Pier 26 introduces visitors to the Hudson River environment through a design inspired by the historical Hudson River landscape. It is also a shining example of how the public and private sectors can work together for the public good. Learn more about the origins of the exciting new public green space. 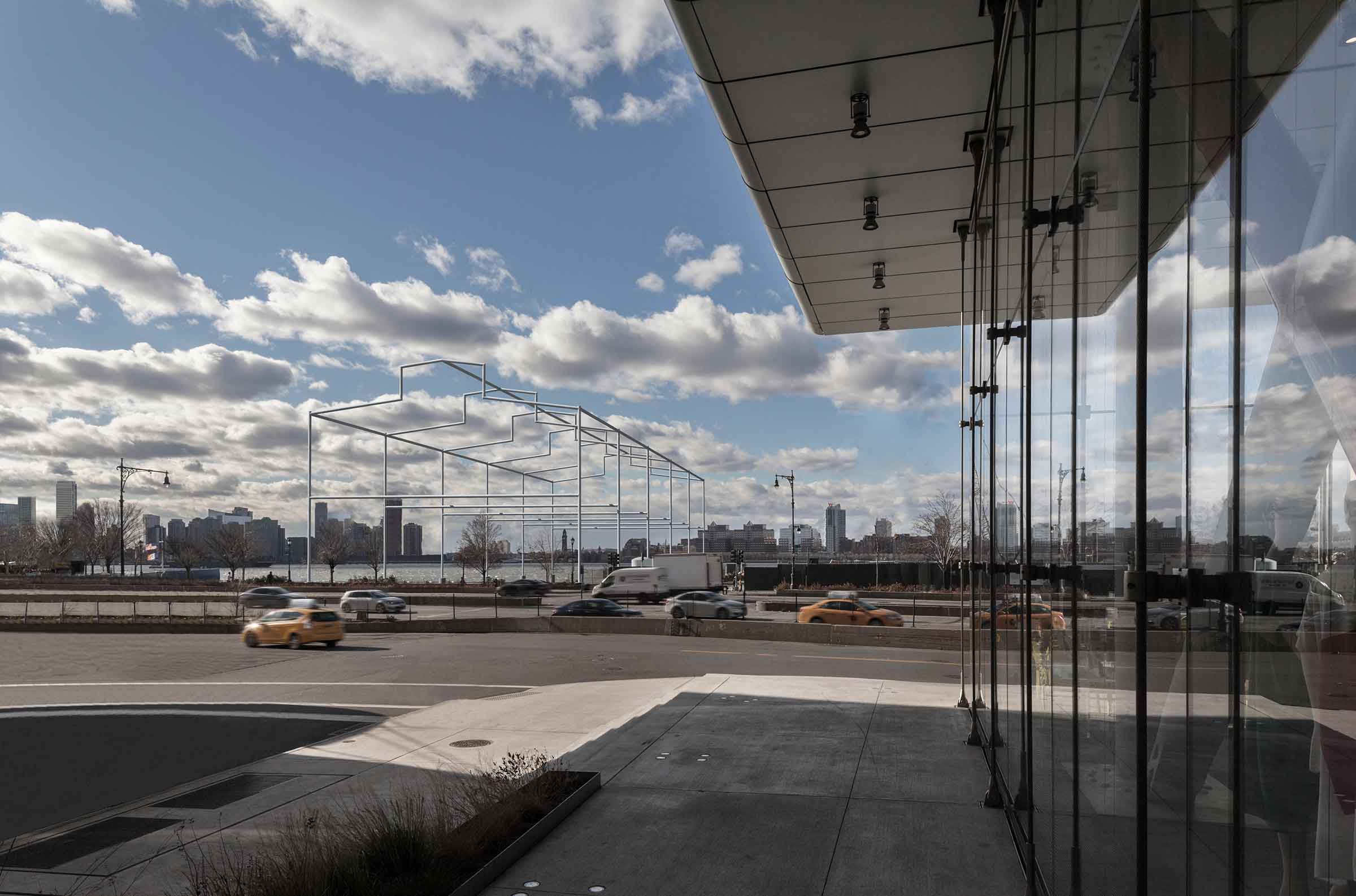 On the south edge of the Gansevoort Peninsula, the Whitney Museum of American Art is constructing a permanent, site-specific public art project by David Hammons (b. 1943) that will be donated to the Park following its completion in Spring 2021.

Day’s End derives its inspiration and name from an artwork by Gordon Matta-Clarke created in 1975. At that time, Matta-Clarke began carving into an abandoned pier shed once located at Pier 52, turning it into a living sculpture that celebrated water and light. David Hammons’ Day’s End will serve as a “ghost monument” to Gordon Matta-Clark’s earlier work, alluding to the changing history of New York’s waterfront with an open, skeletal structure that precisely follows the outline, dimensions and location of the original structure on Pier 52. As one of the largest public art installations in New York City, Day’s End will be publicly accessible and will offer an extraordinary place to experience the waterfront. 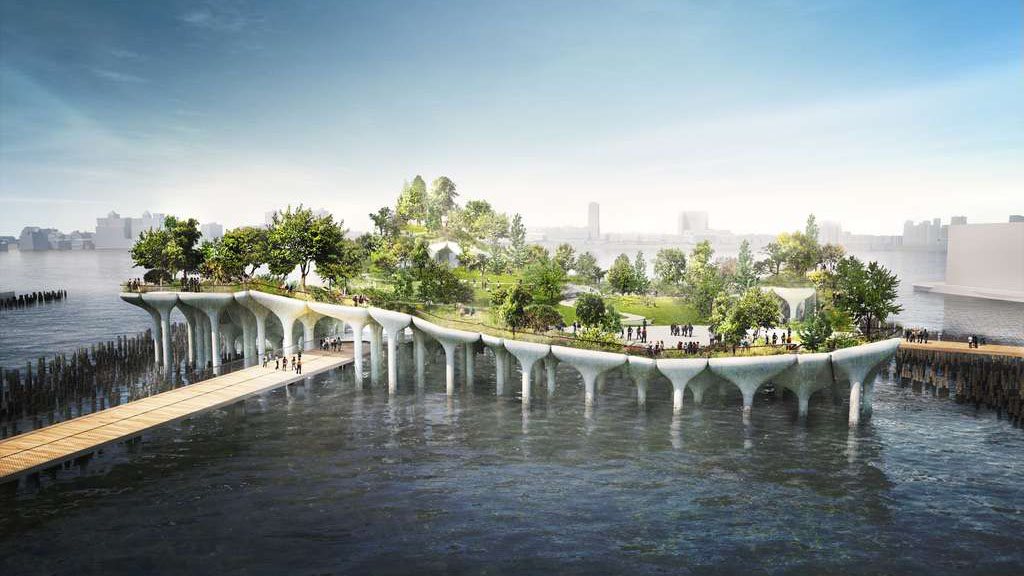 The dramatic structure rising from the park waters just south of 14th Street is soon to be a new Hudson River Park pier known as Little Island. Opening in 2021, Little Island is conceived and built in partnership with the Diller-Von Furstenberg Family Foundation and Hudson River Park Trust. Learn more about the origins of this “floating island”.

Hudson River Park is thrilled to offer new open spaces for New Yorkers and visitors from around the world to explore. Pier 76 has great possibilities for outdoor performances and offers spectacular river views. The $20 million construction project will open to the public in June 2020. The structure will be temporary, with more permanent plans set to be developed by the Hudson River Park Trust with insight from the community.

The state Office of Parks, Recreation and Historic Preservation has begun a partial demolition of the 245,000 square-foot impound facility at the pier and will create interim public recreation space to include a walking area and outdoor flexible space, as well as benches for people to relax and enjoy the waterfront views. The impound facility’s steel support structure will be temporarily left intact to create a unique setting and partial shade.

Construction has begun on the Gansevoort Peninsula, a 5.5-acre site that will be transformed into a green oasis for New Yorkers as part of the continued build-out of Hudson River Park. Public amenities will include a resilient rocky beach with access for non-motorized boaters on the southern edge, boardwalks, a large sports field, dog run, adult fitness area, restrooms and a small concession, pedestrian promenades and a salt marsh on the northern edge.  FDNY Marine Company 1 will remain at Pier 53.

The first step in transforming this area into public parkland involves placing clean sand and gravel onto the existing land to “surcharge” or pre-load the site, enabling the existing land to settle and strengthen so that settlement is not an issue once the Park is complete. The materials pile will remain in place for several months, after which it will be reused on site as part of the eventual landscape.

At our March 25th meeting of Board of Directors meeting, the Trust approved two major contracts for the Gansevoort Peninsula and the first contract for Pier 97. In May, work associated with the Marine Construction and General Construction Phase 1 contracts approved in March will begin. Together, these contracts include the salt marsh and beach with boating launch, boardwalk, lawn for passive recreation, synthetic turf field, esplanades, paths, plantings and general park amenities.  We have also issued an RFP for electrical construction at Gansevoort, and will later release additional RFPs for the park building and other public amenities including the dog run and outdoor fitness area. New York City is approving all of the funds for Gansevoort. Approved contracts thus far total approximately $28 million including contingency. 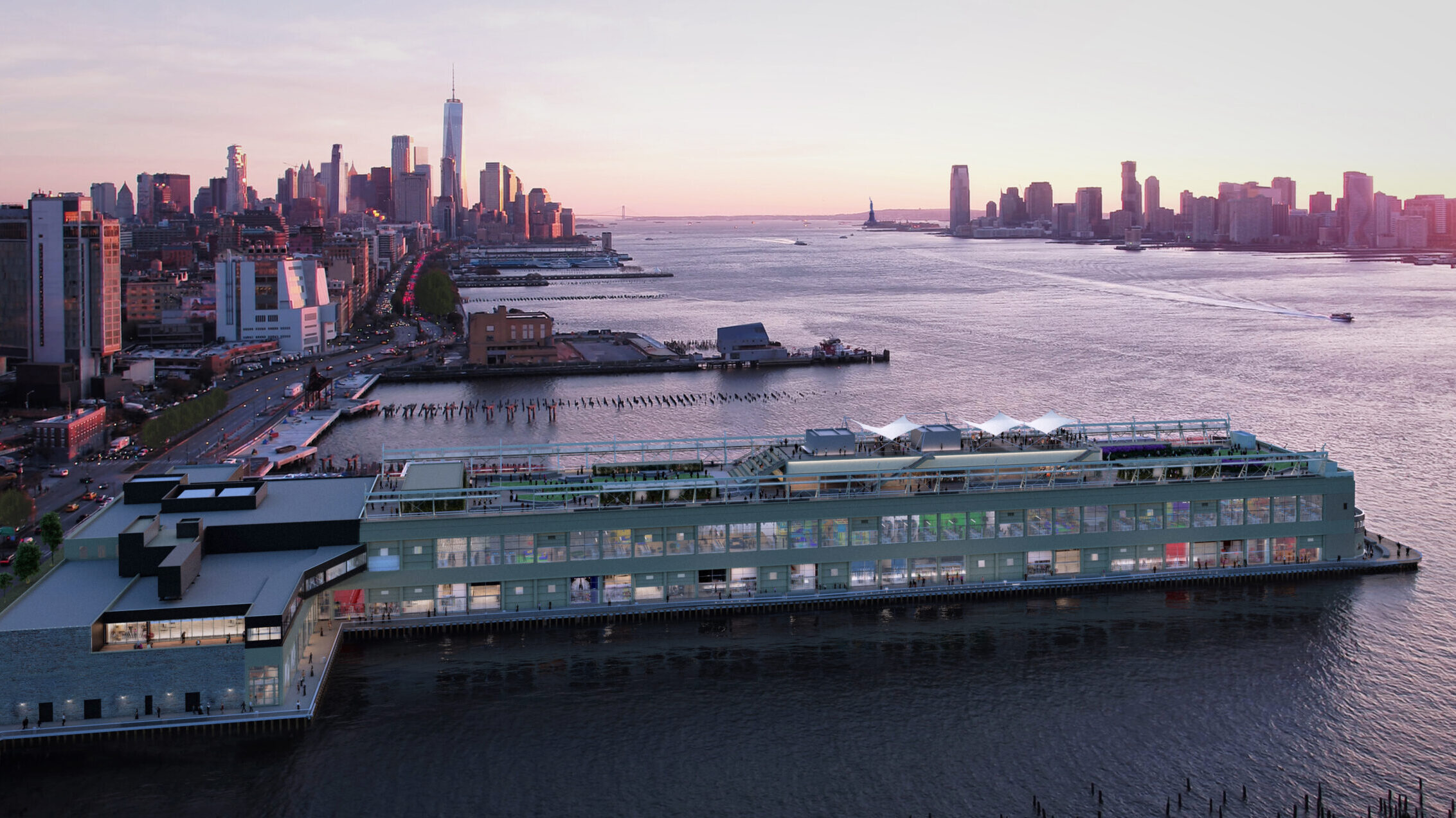 The Pier 57 developer and the Trust are also working on plans for an indoor environmental education space also to be located prominently on the ground floor, to be operated by the Trust as part of its environmental programming initiatives.

City Winery at Pier 57 is now open on the ground floor. This popular performance venue, includes a public restaurant and tasting room, and its signature wine production facility — all overlooking the river. 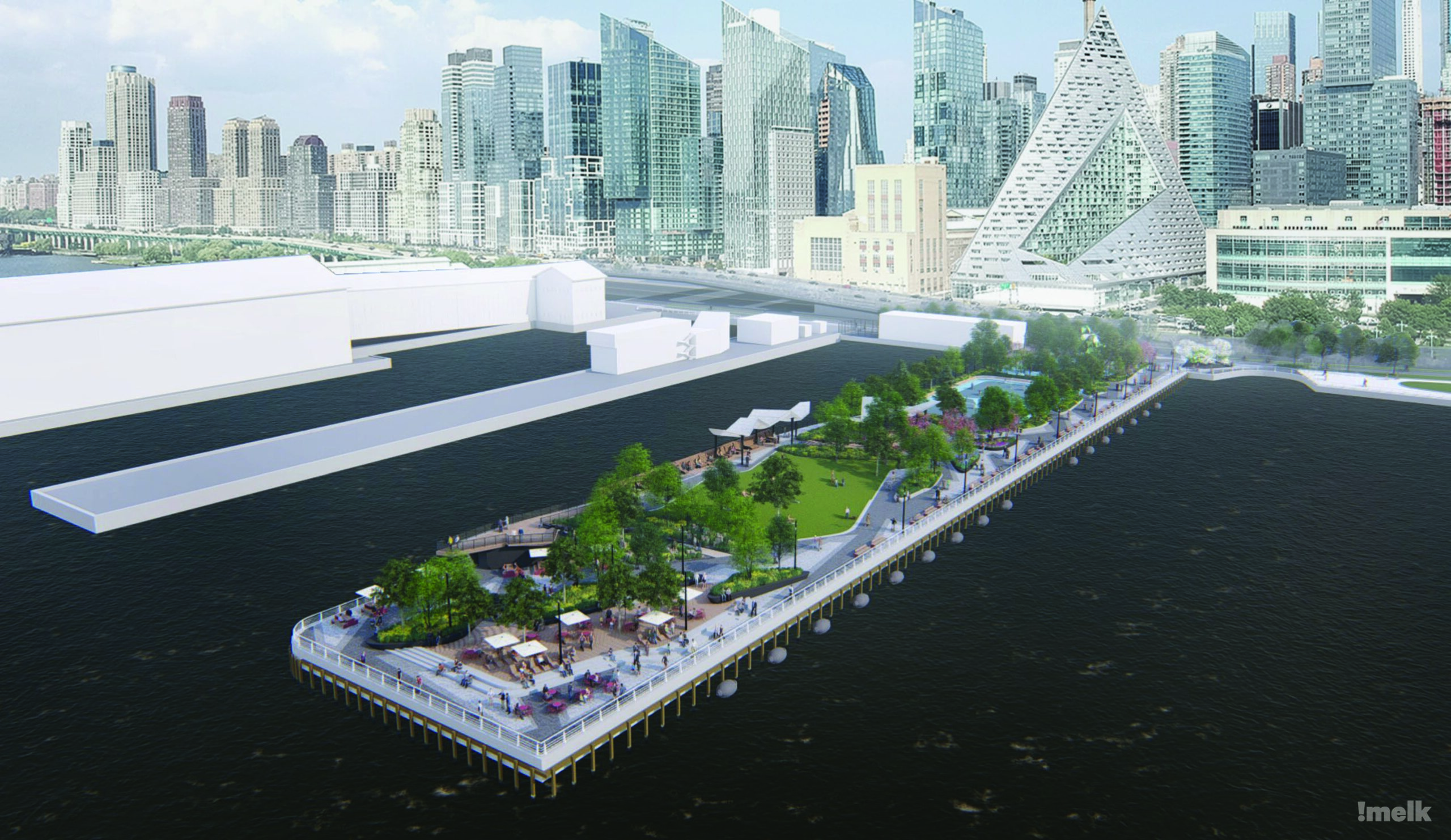 As part of the design process, !melk and the Trust met with the community in November and December 2018 to listen to individuals’ ideas about the design program — i.e., what kinds of uses and spaces are desired. !melk used this information to start developing the concept design for the area and met with the community again in November 2019 to present the very well-received design concept. Please click here to read more. A follow-up presentation to Community Board 4 occurred remotely in Spring 2020.

This neighborhood gem in the Chelsea section of Hudson River Park is about to receive a $12.6 million upgrade. Later this summer, construction should begin on a long-awaited comfort station.  In addition, the redesign features also include an enlarged dog run, a renovated turf field, and a permanent picnic area.

The comfort station will be configured as a gateway to the sports field. The building will feature a unique cladding system and solar panels to reduce the Park’s energy footprint (learn more about the Park’s sustainability initiatives here). The expanded dog run will have areas for large and small dogs, each with canine water play areas, seating and colorful pavement. The popular synthetic turf field will be reconstructed and enlarged to provide a warm up area. The central area of the park, currently a paved walkway, will be transformed into a picnic area with a lawn for recreation. Pathways lined with trees and lush plantings will provide access to all site elements and the Route 9A crosswalk.

Chelsea Waterside Park was originally built by the NYS Department of Transportation prior to the Hudson River Park’s existence. In addition to the upgrades listed above the Hudson River Park Trust has already completed several enhancements, including a comprehensive reconstruction project of the Chelsea Waterside Playground with a custom-designed, multi-colored, 64-foot wooden slide in the shape of a Pipefish, one of many fish species that lives within Park waters. The slide was designed and built by a Denmark-based playground design company, and is the first of their themed playground structures to be installed in the northeastern U.S. The playground also includes multiple water features and reclaimed objects from the waterfront’s storied past. 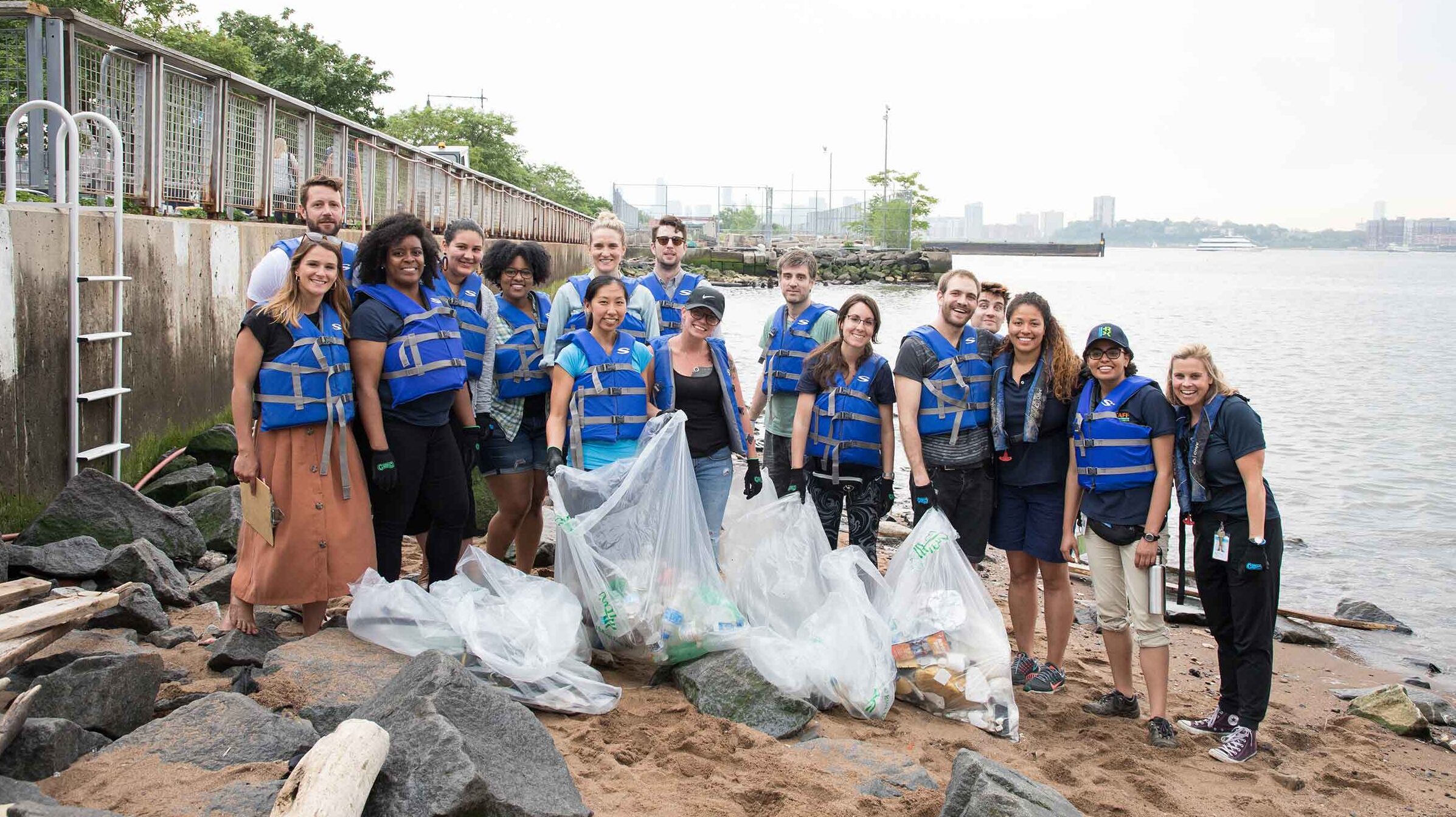 A Milestone for Park Sustainability

In continuing to choose Park Over Plastic, we are supporting a cleaner, greener and more sustainable NYC. With the launch of Park Over Plastic in 2019, we took a big step towards proactively reducing single-use plastics in the Park and empowering our Park community to spread awareness about the harmful impacts of plastic pollution in our environment. Through collaborative research, education and community action, HRPK has become a local leader in plastic reduction efforts. Over the past two years, we worked with researchers from Knology to conduct a study of the Park Over Plastic initiative, which included extensive interviews with Park users, tenants and staff as well as Park-wide waste audits. We are excited to share the findings from their study, click here to learn more about Knology’s recommendations for the future success of Park sustainability.

Hudson River Park depends on Park lovers like you to ensure our four miles remain safe, clean, green and growing.